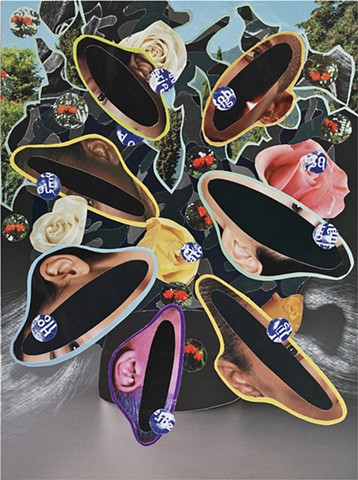 Paul Loughney received his MFA in 2006 from Mason Gross School of the Arts at Rutgers University.

Statement When working in collage I’m placing magazine pieces together which comes from an intuitive process. I’m attempting to make something that reconstitutes images like visual hallucinations; a kind of delirium. My typical scale is modest yet intimate and this invites the viewer for a closer glance. Knowing this ritual, I love to make work that rewards slow looking. That spatial intimacy feels connected to holding magazines. I've followed themes that have materialized over the years; erotic, psychologically charged, idealized bodies and sexualized undertones are pervasive throughout. Any narrative becomes a distorted familiarity, one where the viewer might identify fragments but is left to assemble the parts into coherency.

His work can be found in the permanent collection of Nobel Collection in Zurich; Purdue University, Indiana; Jane Voorhees Zimmerli Museum, Rutgers University, NJ; New York Public Library; and the Brodsky Center at The Pennsylvania Academy of the Fine Arts. He currently lives and works in Brooklyn, New York.